Chilling series, but important to read.

So grateful to CNN for this particular series.
Posted by Unknown at 2:22 PM No comments:

Here.
Posted by Unknown at 6:10 AM No comments:

Cross-posting about the team that makes a good leader better.

Here.
Posted by Unknown at 5:54 AM No comments:

A nice mention of our second book in the Survival Manual series (here).
Posted by Unknown at 5:28 AM No comments:

I like fitness trackers.  I like measuring things, and I don't expect the trackers to have pinpoint accuracy.  They exist as motivational devices and to show trends, and--generally speaking--they're good at those two things.

I said "generally speaking" because the Fitbit Charge did not serve those purposes well.  The first Charge I had lost battery life at an alarming rate.  After extensive back-and-forths with Fitbit, I finally got a replacement.  The charge worked well, but the sleep portion had two modes (normal and sensitive), neither of which captured my sleep accurately.  I know that my average sleep isn't 8+ hours (unfortunately), and I know that it's not 4 hours (thank goodness).  So, after a spate during which Fitbit wouldn't even sync my (over- or under-estimated) sleep, I gave up, ordered a Vivofit from Garmin, and asked for a refund.*

The refund process has been awful.  Obviously, each "team" (person?) at Fitbit doesn't keep a running customer log.  I got steadfast refusals to refund, one "yes, we'll refund, and here's where you send the old one" email," several "oops--we didn't mean to send it" emails, another "we acknowledge that we've sent you a refund authorization" email, and finally a "we don't care that we sent you a refund authorization--we're still not going to refund you the price, but, hey, thanks for returning it" one.  So Fitbit has my old tracker, and I'm out the money for the Fitbit.

I told Fitbit that my response to this frustration would be to blog about my experience, to tweet about it, and to post reviews, and that's what I intend to do.

Lesson to anyone dealing with the public, part 1:  keep a customer's file in one place, so that you don't whipsaw the customer with contradictory emails.

Lesson to anyone dealing with the public, part 2:  the Internet has a broad reach, and anyone with a keyboard can weigh in (for better or worse) on the company's service.

Fitbit?  Given your decision not to play fair, I'm going to spend some time this morning before work making sure I circulate this blog post as widely as possible.

UPDATE:  my Amazon review of Fitbit went live this afternoon. 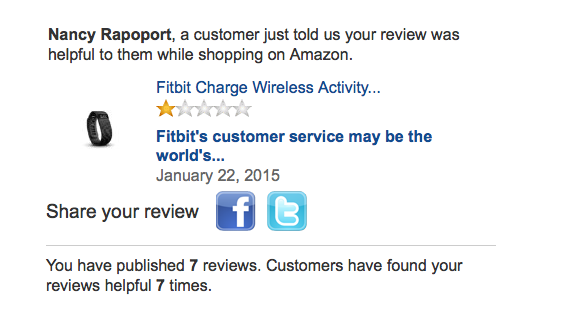 Just as a contrast, one of my Amazon packages was late in getting to me, and Amazon not only credited my account to make up for the late shipping, it also extended my Amazon Prime membership for a month--all because of a one-day-late shipment.  In case you're keeping score, that'd be:

UPDATE on 1/31/15:  I've been informed that Fitbit has mailed my refund check, but that's after--I kid you not--no fewer than 10 emails from Customer Service refusing to do so, then saying that the refund was coming, then saying it wasn't, etc., etc.  It's a bit like that scene from Noises Off:


Lloyd: [Barging in from the house] What the *...* is going on?
Belinda: Lloyd!
Frederick: Holy cow!
Poppy: I didn't know you were here.
Lloyd: I'm not. I'm in New York. But I can't sit out there and listen to two minutes, three minutes, one minute, two minutes!
Belinda: Lloyd! We're having big dramas back here!
Lloyd: We're having big dramas out *there!* This is a matinee, Love! There are senior citizens out there! "The curtain will rise in three minutes," we all start for the gents! "The curtain will rise in one minute," we all start running out again! We don't know which way we're going!

Fitbit emailed me to let me know that it was my fault for the miscommunication:  I had had the temerity to email Fitbit from two different email addresses, and Fitbit was incapable of realizing that one customer could have two addresses.  Res ipsa.
____________________
* I even actually revoked my acceptance, but Fitbit didn't want to bounce THAT sentence to its lawyers.
Posted by Unknown at 5:49 AM 1 comment:

Really cool workshop on conducting empirical legal scholarship coming up this summer at CERL/Wash U.

See here for info.  I can't make it to this one, but I'm hoping to do one in the future.  I've heard great things about it.
Posted by Unknown at 12:42 PM 2 comments:

I'm pretty sure that's not the correct use of the word.

Now that I'm back from the AALS Annual Meeting, I remember what I liked about going in years past (seeing old friends; making new ones) and what I didn't (a lot of puffery and jockeying for status).*  But the topper this year was the indiscriminate use of the word "scholar," as in "I'm a scholar of ______."

I'm comfortable with people self-identifying as professors (after all, that's our title), or saying that their area of study is X, or suggesting that they're focusing on X.  I love hearing what someone's researching, just as much as I love hearing about what that person's doing in terms of teaching (or, for that matter, his or her hobbies).  And I love batting around ideas just as much as the next person.  I got some great suggestions about some of my projects from friends at the conference.

But saying "I'm a scholar"?  Um, that's something that the person reading the scholarship gets to decide.

Why is it that I think that we can call what we do "producing scholarship," but that referring to ourselves as scholars is a bad idea?

Answer #2:  Just as you can't make something "interesting" by declaring it thus, you can't be a scholar just because you're writing something in a particular area.  Trust me:  the best scholars don't toot their own horns that way.  Some of the most amazing folks in academia are jaw-droppingly modest.  Let your readers decide how good your work is--not you.

Posted by Unknown at 3:55 PM No comments: