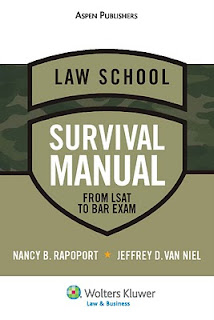 You've got to love this noir-ish YouTube clip about law school life.

Today, Goldman has fully monetized the value of its reputation, and anyone who pays such a premium is a fool.

No one's said it better.  Just because something might be legal (and we don't know enough yet to know whether Goldman's acts were legal here) doesn't make it ethical--and being unethical has ramifications all its own.
Posted by Unknown at 5:49 AM No comments:

But apparently I was mistaken:  see here.

Ah, so many jokes, so little time.  Let's start with:


* Cf. Jacobellis v. Ohio, 378 U.S. 184, 197 (1964) (Stewart, J., concurring) ("I shall not today attempt further to define the kinds of material I understand to be embraced within that shorthand description] [of pornography; and perhaps I could never succeed in intelligibly doing so. But I know it when I see it.").
Posted by Unknown at 3:10 PM 2 comments:

The answer to hateful speech is more speech.

And there's some very hateful speech going on in Denver right now, along with some counter-protests (see here).  I'm glad that there are people out there countering the Westboro Baptist Church speakers (see here).

After I post this message, I'm going to join the Facebook page (here) mentioned in the articles.
Posted by Unknown at 10:19 AM No comments:

Take a gander at what my buddy, Alan Childress, has done lately:  here.  Hat tip to ALL my buds at Legal Profession Blog!  Congrats, Alan!
Posted by Unknown at 12:45 PM No comments:

Hat tip to the Chronicle of Higher Education.  Here it is:  enjoy!
Posted by Unknown at 8:17 PM No comments:

A new social networking "first" for me....

So I'm taking a break from work by checking my Facebook page, and one of our Boyd law students IMs me to ask me to supervise his summer research paper.  I've got to say that's the fastest I've ever been asked (or have answered) such a request.

And it proves that our students are creative about finding ways to reach us.
Posted by Unknown at 8:19 PM No comments:

Legal Ethics Forum has posted an update on Nancy Temple's career (here).  Nancy Temple was the Arthur Andersen lawyer whom the jurors in the obstruction of justice case blamed (wrongly, I think) as the "corrupt persuader."  I remember how several of my in-house counsel friends shuddered when they read Ms. Temple's email warning David Duncan not to call a recurring expense a non-recurring one in a press release.  That's a normal email for a lawyer to send, but I think that the jury felt as if Ms. Temple was trying to do something other than clear up an accounting classification.  (I also think that the public's distaste for lawyers generally contributed to the verdict.)

I'm very glad that Ms. Temple's doing well.  I think she had gotten a raw deal.
Posted by Unknown at 7:20 PM No comments:

Above The Law has an interesting post about the disconnect between what law schools do and what law firms want.

See here.
Posted by Unknown at 7:57 AM No comments:

Sure, all of the folks who are front-runners are good replacements.  No one's arguing that.  But if President Obama wanted to pick someone who would be a superb Supreme Court justice and who would trigger no partisan blow-ups at confirmation, why not U.S. District Court Judge Lee Rosenthal (here)?  She's incredibly smart, well-educated, and well-respected.

Yes, I've known Judge Rosenthal for many years, and I know her parents, so (as we say in Texas) I have a dog in the hunt.  But even people who aren't as well-acquainted with her as I am think that she's a wonderful judge.

You can't make this stuff up, continued.

See here.  Hat tip to my buddy Kathleen Lyon for this one!
Posted by Unknown at 11:56 AM No comments:

Why corporate boards need to designate one director each meeting as a nay-sayer.

A perfect example (here), by Andrew Ross Sorkin of the New York Times.
Posted by Unknown at 7:43 AM No comments:

On the other hand, the secondary market for our SECOND edition of the Enron book is doing surprisingly well. 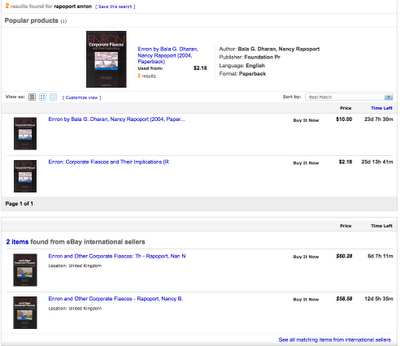 An above-market price on our second edition takes some of the sting out of the $2.18 price on the first edition.  And, thanks to Mythbusters (here), we can start a secondary market for our first edition.  Of course, the Mythbusters didn't try the test with OUR book....

We've made it to the small time! 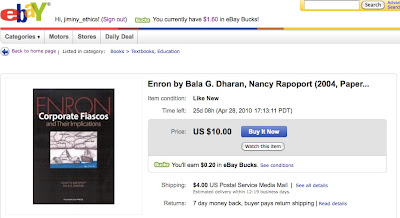 Made it to the national market at last....
Posted by Unknown at 8:53 AM No comments:

Couldn't make this up if I tried.

See over at Legal Profession Blog (here).  Hat tip to Scott Unger for this one!
Posted by Unknown at 6:31 AM No comments:

Too much time, or not enough? The annual Peeps contest....

Who can't love the Peeps dioramas (here)?  Hat tip to my buddy Kathy Carpenter for sending this year's contest entries my way....

Update:  another hat tip to my buddy Kathleen Lyon for the Washington Post's Peeps contest (here).

Thanks to (sorry for the pun) MY "peeps" for forwarding these to me!
Posted by Unknown at 10:39 AM No comments:

The sky's not falling, but law firm economics sure are changing.

See this article (here) in today's New York Times.  I keep saying that the numbers don't crunch--someday, law firms will have to rethink compensation AND billing from the ground up.
Posted by Unknown at 8:05 AM No comments: