A good reason to be proud of the University of Houston Law Center (10th anniversary of doing something very good).

See here.
Posted by Unknown at 5:16 PM No comments:

Front page of the New York Times (here)!  I've known Judge Frye for around 15 years, and she and her wife Trish are lovely, warm, wicked-smart people.

I wish that her time at the University of Houston Law Center had been more welcoming.  The story captures some of what she went through:


The self-defense, combined with a charm offensive, began in law school itself, at the University of Houston. During her first semester, she felt shunned. Determined to break out of her isolation, she requested the seating charts for her classes, memorized her classmates’ names and approached them one by one. She tussled with the administration to gain access to the women’s restroom, the kind of fight that continues to this day.

I'm so proud of her that I could burst, and I know that her story will inspire others.
Posted by Unknown at 7:15 AM No comments:

Last night, we decided to order in and catch up on some shows, so I did what I often do when I'm out of town--order from GrubHub.  I ordered nice and early (yes, we're early risers, so we're early diners, too), on the theory that the food might take more than an hour to arrive.  I got a confirmation number with my "yes, you've made an order" notice (below).  After more than an hour had passed without getting the food, I called the restaurant, which told me that I had no such order on file.  I started to order directly from the restaurant, because we like the food there a lot, and then decided that I'd order elsewhere instead (which we did).  I told the restaurant that we didn't want to order, after all.  I tried to contact GrubHub, but the website was down, the phone was busy, etc.  So I tweeted my problem to +GrubHub Seamless.  Radio silence.

I got back on Twitter and on Facebook.  The Facebook site indicates that the same thing was happening to more people.  I posted another tweet, and once I finally got the GrubHub email that "my order was in the works" (three hours too late), I replied and explained my problem--and asked that I not be charged.

STILL radio silence.  Let's see how long it takes for GrubHub to get back to me and others affected by yesterday's webfail. 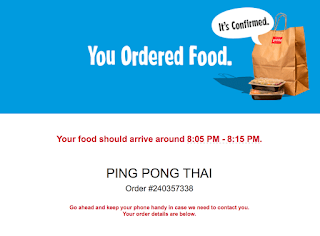 Posted by Unknown at 4:58 AM No comments:

Professor LeRoy makes an important point about failing to realize the precursors to evil (here).  By staying silent when evil occurs, we are making our world less safe and diminishing our civilization.
Posted by Unknown at 6:57 AM No comments:

Proudest moment of my time at UHLC.

I had so many good times at UHLC, including (surprisingly enough) the post-Tropical Storm Allison time, when everyone at the law school -- including those inside the school and our alumni and other supporters -- pulled together to rebuild just under $50 million in damage.  But probably the high point was working with UH's then-president Art Smith, with Sondra Tennessee, and with Seth Chandler on the decision to move Loyola-New Orleans's law school INTO UHLC after Katrina.  Loyola's community became wonderful neighbors and friends.  As we remember Hurricane Katrina, it's a chance for me to thank again all those who made that temporary arrangement seamless.
Posted by Unknown at 6:49 AM No comments:

So proud of UNLV's Howard R. Hughes College of Engineering!

If you ever want to see the value of research in action, watch this clip.  Thanks to Professors Brendan O'Toole and Mohamed Trabia and their team, Hailey Dawson now has her "special hand."
Posted by Unknown at 5:24 AM No comments:

I'm really not a ConLaw person--you can tell that from my law school transcript--but I think that there is a difference between saying something where people can walk away from the speaker and saying a lot of things where people are stuck listening to that person.  It's a hard issue, though.  I get that.

The tough issue that the Salaita case raises is that no one knows if what he says outside of class (hateful, but entirely his right, and I'd be first in line to defend him--and then first in line to meet his speech w/different speech) would also affect how he'd treat students inside class (where he would have to create a learning environment in which students would be treated fairly).  I'm glad that Prof. LeRoy is part of this debate.  I'm glad that others are, too.  What I hope is that everyone understands the complexity of the issue.

Too often, unfortunately, people say that there's only one side of a particular issue and that anyone on the other side is wrong-headed, or discriminatory, or dumb.  And that's no way to debate a peer.
Posted by Unknown at 4:53 AM No comments: