If you have time and the inclination, could you please click here and "like" this picture?  It's not the most flattering for us, but if we get the most "likes," then I get five free entries in this year's comp.  Many thanks!
Posted by Unknown at 7:15 AM No comments:

Why I could be a good director of a public company.

Today's WSJ offers some thoughts on why there aren't more female directors (here).  As I say over at one of my other blogs (here), there are some frustrating implications of that issue.  But here's why I might be useful to some companies:
So if you know a company that's looking for more women, and you're comfortable suggesting me as a candidate, I'm interested in talking.

* Of course, if Disney's board ever comes calling, I've loved that company since, well, I was a kid.
Posted by Unknown at 6:59 AM No comments:

Saw Brian Leiter's blog this morning (here) and was saddened to hear about Larry's passing.  Not only was he exceptionally smart and creative, but he seemed like a very nice person.  I'll miss reading his work, and my heart goes out to his friends and family.
Posted by Unknown at 8:24 AM 1 comment:

Customer service feedback of the day. 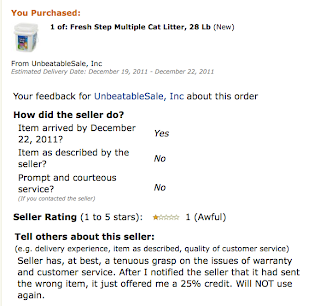 How many of you have seen Matilda at the Algonquin?

Whether you have or haven't, check out this N.Y. Times story on Matilda's new limitations on roaming (here).

I read the story to Shadow, who simply sniffed and wandered off.  Grace, on the other hand, didn't even pause to hear the news.
Posted by Unknown at 7:11 AM No comments:

Got to love an essay called "Happy Hanukkah, Marines!"

It's in the Wall Street Journal (here).  Semper Fi and gut yontiff!
Posted by Unknown at 7:32 AM No comments:

Here.  Thanks to Bill Rochelle and Lee Pacchia for inviting me to do one of their podcasts.
Posted by Unknown at 7:30 AM 1 comment:

Courtesy of my buddy Turtle Brennen (here).
Posted by Unknown at 7:55 PM No comments:

My buddy Scott Chase just received recognition for his dedicated community service.  Here's the announcement from the DAYL Foundation.  Scott's being awarded this year's DAYL Foundation and DAYL Foundation Fellows' Award of Excellence for his extensive volunteer service.  CONGRATULATIONS!

AMENDMENT:  Harriet Miers is the keynote speaker.  Scott's the sole recipient of the award.

Posted by Unknown at 9:48 AM No comments:

Here.  Classic.
Posted by Unknown at 9:44 AM No comments:

Thanks to Sergei Shapoval (Sergei's Dance Studio), I get to do things like this:

Posted by Unknown at 8:04 AM No comments:

See here.  CLASSIC.
Posted by Unknown at 8:18 AM No comments:

We don't learn. Maybe we can't.

Today's WSJ article about the Olympus scandal (here) proves that we haven't learned anything, really, about avoiding corporate scandals.  Why?  Here are some possibilities:

Nah.  There are good people, and there are evil people.  But most of us fall somewhere in the middle, and it's the situations that we find ourselves in that will push us toward either good behavior or bad behavior.  So I have to reject that gloomy "people are just evil" explanation.

__ Smart people think that they can fix mistakes by covering them up.

Yep.  Ever since Watergate, we've known that the mistakes aren't nearly as bad for us as the cover-ups are, but we keep making the same "let's cover things up" mistake.  Heck, Vegas and other gaming centers are based on the idea that folks will chase their losses until they win again (and they usually don't win again).  But smart people keep thinking that they can outsmart the system, and that they won't get caught.  Will we learn from our mistakes?

Based on the empirical data, I'm thinking that we won't.  (But that doesn't mean that we shouldn't try.)
Posted by Unknown at 7:57 AM No comments:

Everyone has a bucket list.   On mine?
__ Swimming with sharks?  Yep.  (Thanks to the Georgia Aquarium.)
__ Seeing a great white shark?  Missed it by two weeks, and still enjoyed our trip to the Monterey Aquarium.
__ Going down to Titanic in a submersible?  Doesn't look likely.  Today's New York Times story (here) prices the final year of trips at almost $60,000 each.  Nevada doesn't have a lottery; I'm no good at video poker or any other type of gaming; and no one's volunteering to sponsor a trip for me, so I have a feeling that this bucket-list trip is out of my league.  Well, at least there's the Big Piece in Luxor's Titanic exhibit.  That'll have to do.
Posted by Unknown at 7:32 AM 1 comment: