And a hat-tip to Brad Sims for this Wall Street Journal op-ed (here). Thanks, Brad!
Posted by Unknown at 8:32 AM No comments:

My colleague (and friend!) Rachel Anderson has a great blog here. Brava, Rachel!
Posted by Unknown at 8:42 AM 3 comments:

See here.
Posted by Unknown at 6:35 PM No comments:

For all of our wounded warriors

See here (hat tip to my hubby for sending this to me). You can find out more about the Wounded Warriors Project here. You can donate to the project here.
Posted by Unknown at 1:14 PM No comments:

Anonymous postings are the last vestiges of cowards.

After reading the latest barrage of comments over at Wild Wild West's post about late grades (here), which managed to get picked up by the Wall Street Journal's law blog (here), I have to confess that I'm stunned that so many people feel compelled to post vitriol anonymously. Based on the tenor of their comments, I'm going to assume that the bulk of the anonymous posts were written by law students.

Even on the theory that law students often don't make the connection that they're actually going to be lawyers after they graduate and pass the bar, surely they realize that they'll have to sign letters and pleadings with their names as lawyers and that they won't be able to hide behind "Anonymous" sobriquets then? So why do they--as well as so many others--hide behind anonymous postings on blogs?

I doubt that most of them have a true fear of retribution. There are people in the world who can fear retribution: those who suffer abuse in relationships; those who are here seeking asylum from other governments; those on the wrong end of power imbalances with very nasty bosses. Those reasons are good ones for seeking anonymity. Lobbing nastygrams, especially without investigating the reasons that may have caused the complained-about situation in the first place? Not a good reason.

To you budding lawyers out there who are writing anonymous comments on the Wild Wild Law post above: maybe you should be anonymous. Were I to write some of what you've written, I'd be ashamed, too. When you become lawyers, though, you'll have to stop behaving so childishly. I'd be a lot more impressed with you if you'd have the courage of your convictions and sign your name to your comments. I have.
Posted by Unknown at 8:55 AM 16 comments:

A once-in-a-lifetime opportunity to relive Apollo 11.

Check out Wechoosethemoon.org. You can listen to what NASA heard 40 years ago.

Forty years ago, I was young enough to think that going to the moon wasn't a big deal. Now I know that it was a miracle--the science worked; the people involved worked up to their potential; and for a brief moment, everyone on Earth got to see an achievement of truly international import. As an adult, I love the space program and all that it brings us.

Thanks, NASA--your people do so much for us!
Posted by Unknown at 8:20 AM No comments:

What makes it so good is that the guy has Flatley's mannerisms down pat.

Commentary on our times. 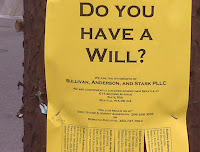 A hat tip to my buddy Marc Stern, who forwarded this pic to me.
Posted by Unknown at 1:45 PM 1 comment:

This just in: cats outrank us. 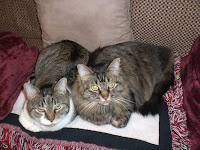 Thanks to my brother-in-law, more proof that Grace and Shadow rule our roost: here. Considering all of the stupid human tricks that these two cats have trained us to perform, we're not surprised.
Posted by Unknown at 2:33 PM No comments:

A nice way to feed some animals.

My hair guru can beat up your hair guru.

My buddy Andy Spalding is spending a year at the University of Mumbai, and here's what he's working on these days (here). Should be a fun read!
Posted by Unknown at 7:50 AM No comments:

Political pressure, the rankings, and one law school's response

This morning, I read Larry Ribstein's post about the brouhaha between the Chicago Tribune and the University of Illinois Law School (here). Seems to me that we should have been discussing the pressure brought to bear on admissions years ago: pressure not just by highly connected politicians but also by powerful donors and alumni. There's a difference between strongly recommending someone for school (totally OK) and linking the failure to admit with a serious threat of retaliation (not at all OK).

Of course admissions decisions are affected by the additional benefits that some candidates bring to a school--and, within the range of acceptability (the ability of the candidate to perform decently at the school), I have no particular beef with the process. No admissions process has mathematical certainty, and there's plenty of room for leeway. At some point, of course, the candidate fails the blush test, and someone has to say no to the pressure.

How do the rankings fit in? Thanks to the weighting of LSAT and UGPA, the admission of more than, say, 25% of the class with candidates having low quantifiable indicators of success runs the risk of dropping a school's USNWR rankings. Schools may well be wary of accepting candidates with low quantifiable indicators who don't also have powerful outside references (the offsetting benefit), although many of these candidates can end up doing quite well in law school. (I'm pretty sure that I had the lowest LSAT in my Stanford Law entering class....)

In an era where we're getting angrier about corruption, Larry Ribstein is--again--quite right: get angry at the people exerting the pressure, not at the law schools that are victims of it.
Posted by Unknown at 7:33 AM 1 comment:

A fresh take on rankings

Bridget Crawford has a fascinating post at Feminist Law Professors regarding ranking law schools using SSRN downloads (here). Hat tip to Paul Caron at TaxProf Blog for this one. Thanks, Paul!

Frankly, I'm trying to devise a ranking system based on the opportunities for the faculty, students, and alumni to network--something along the lines of measuring law review placements, clerkships, and careers 5, 10, and 20 years out. My theory (still working on it) is that there are really just three categories of law schools: the truly elite, distinguished more by the networking opportunities; the modal (most frequently occurring) law schools, which are good but don't have the same networking opportunities; and the truly sub-par schools, which provide few if any options for their graduates, especially with respect to bar passage. If anyone has any ideas for methodology, I'm open.
Posted by Unknown at 9:09 AM 3 comments: