Have you no sense of decency, Mr. Farrakhan?

I was not surprised but saddened by the latest venom spewing from Louis Farrakhan (see here).  He ignores the long history of Jews being deeply involved in the civil rights movement and regurgitates the hoary old saw about Jews "sitting on top of the world in power, with riches and influences . . . ."

Mr. Farrakhan:  Have you no sense of decency?
Posted by Unknown at 3:37 PM 1 comment:

Hat tip to Cathy Glaze for spotting it. 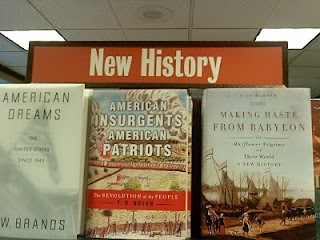 Posted by Unknown at 6:16 PM No comments:

I've been impressed with the exceptional level of customer service at the Hyatt Regency Minneapolis and the the Omni Bayfront in Corpus Christi.  It's nice to be able to give customer service kudos from time to time.
Posted by Unknown at 5:18 AM 3 comments:

Every now and then, one of my research areas crops up in other blogs.

Oh, and that whole thing about when conflicts counsel should or shouldn't be used?  See here, here, and here.

Having courts think clearly about conflicts of interest in bankruptcy cases?  Wonderful.

Someday reading a court opinion that cites one of my articles on the topic?  Priceless.
Posted by Unknown at 7:07 PM No comments: 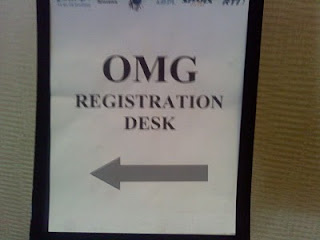 (Seen while walking through a hotel on the way to another conference.)  That is one enthusiastic registration desk....
Posted by Unknown at 3:07 PM No comments:

See here.
Posted by Unknown at 9:02 AM No comments:

Told you so (Skilling conviction overturned).

See here.  Opinion is here.  My prior post is here.
Posted by Unknown at 8:27 AM No comments:

Do law school grades mean anything?

This morning's New York Times has a front-page article (here) about law schools raising their curves to make their students more attractive as job applicants.  (Hat tip to Scott Unger and my dad.)

That change reminds me of Ellen Degeneres's routine about the difference between "upright" and "reclined" on airplane seats (here).  We can call something whatever we want, but that doesn't change the nature of the thing.  Even if the curve goes higher (say, a curve around a B+ instead of a B-), it's still an ordering of all of the people in the course.

Curved grades tell people how a given person did on a given exam on a given day, compared to the other people who took the exam that day.  It's rather like George Carlin's old joke about partial scores in sports ("Notre Dame, 6").  It's information, but it's not complete information.

Employers use grades and the U.S. News rankings of schools because they believe that those two data points are approximations of how "good" the job candidates are, even though grades are actually not such a good shadow variable.  Very few clients ask their lawyers to answer hypotheticals for three hours.  There are a lot of the intangibles that make a good lawyer good, such as common sense, emotional intelligence, and teamwork, and grades don't necessarily correlate with those characteristics.  I keep telling employers that taking a little more time on the front end (for example, by asking job candidates to talk about how they'd approach a particular situation) would pay off in the long run (retention of good candidates).

But until employers are willing to spend more time looking at more than mere transcripts, I can understand how tempting it is to raise a school's curve.

Why not go all the way, though?  Some schools make it downright difficult to get anything but As.  Playing with curves is just the start of something big--why not grade for mastery instead of for comparison purposes?  Instead of curving grades, establish clear standards for what performance would constitute an A, what lesser performance would earn a B, etc.  Then grades might actually be useful to the outside world.

Update (6/25) (hat tip to my buddy Seymour Serebnick):  see the NYT's letters to the editor about the original story here.
Posted by Unknown at 3:25 PM 1 comment:

Joe Nocera on the difference between two corporate cultures

See here.  This is a great illustration of why cultures can create crises or do their darnedest to prevent them.
Posted by Unknown at 6:55 AM No comments:

Over at the New York Times (here).  My favorite?


Mike Moncrief
Mayor, Fort Worth, Tex.
Texas Christian University
Never be afraid to try something new. Remember: Noah had never built an ark, but it was a large group of professionals that built the Titanic.

Posted by Unknown at 6:53 AM No comments:

(If you can't see the whole thing, click on the cartoon.)  Hat tip to comics.com.
Posted by Unknown at 6:50 AM No comments:

Update on prior post: and a hat tip to Bankruptcy Law Network

Thanks to Russ DeMott for this great post (here).  I like Russ's bankruptcy posts so much that I'm going to add him to my iGoogle page.
Posted by Unknown at 4:02 PM No comments:

Yet another good post by Michelle Harner over at Credit Slips

I've really been enjoying her posts--and this one's great (here)--and, of course I always enjoy the Credit Slips blog.
Posted by Unknown at 7:27 AM No comments:

My new favorite list: MSN's 10 Companies We Love To Hate

Sprint, of course, is on the list (and has been for years)--see here.  The full Customer Service Hall of Shame is here.  Bravo, MSN!

Sadly, Sirius isn't mentioned.  But there's always next year....
Posted by Unknown at 5:34 PM No comments:

Marvelous distinction between "leaders" and "stewards" over at The Faculty Lounge.

See here.  Hat tip to The Faculty Lounge.
Posted by Unknown at 12:49 PM No comments:

Sirius "wins."  I tried to cancel my Sirius over the phone.  (I now have an XM radio and foolishly thought that the transfer to XM would be seamless.  Wrong.)  After being on hold for 20 minutes, I gave up.  I've sent a cancellation letter, but we'll see if Sirius honors that letter.

Why is it that companies don't realize how easy it's become for customers to broadcast their complaints to the world?
Posted by Unknown at 9:41 AM No comments:

It keeps turning on by accident, draining the battery.  Does anyone have any suggestions about how to prevent the accidental "on"?  Thanks!
Posted by Unknown at 9:39 AM 2 comments:

From my buddy Gordon Goolsby (see here).  It's definitely time for a heads-up, folks.
Posted by Unknown at 11:11 AM No comments:

Email ThisBlogThis!Share to TwitterShare to FacebookShare to Pinterest
Labels: Death of the billable hour, Law firm economics, Other blogs

Last night's MTV highlights:  here.  Loved it.
Posted by Unknown at 7:01 AM No comments:

Glenn Reynolds is right about the higher education bubble.

See here.
Posted by Unknown at 2:21 PM No comments:

Hey, when A-Rod is one of the largest unsecured creditors, A-Rod gets to be on the creditors' committee.

See here for his description.  It sounds like a great course!
Posted by Unknown at 2:15 PM No comments:

Should a lawyer withdraw at the first indication that the client wants to lie?

My buddy Marc Stern forwarded this blog post to me (here).  My first instinct was "What the hey? Of course a lawyer should withdraw immediately."  I liked the blogger's observation below:


In short, the lawyer needs to make sure the client knows what the lawyer knows: the lie will eventually be discovered.  The client needs to confront this fact and agree to be truthful to the court.  It is a rare client whose force of personality cannot be overcome by his or her lawyer’s carefully presented arguments, especially where the client is clearly wrong, and the client is committing a crime by refusing the lawyer’s advice.

My problem with this concept is that I don't think that people who lie intentionally are going to be persuaded to become honest.  (See an earlier article I wrote about this topic here.  The Kaye, Scholer lawyers thought that their client, OPM--which was an acronym for "Other People's Money," always a bad sign for a client--was going to reform after being caught in outrageously dishonest acts.  Kaye, Scholer's mistake in trusting the stubbornly dishonest client is an object lesson for all of us.)

Although it's possible that a lawyer's "force of personality" may help a client whose honesty is wavering to see the light, I think it's equally possible for a lawyer to persuade herself (wrongly) that she has won over the obstinately lying client.  That lawyer may well find herself the product of a disciplinary action later.

The well-meaning and honest lawyer faces many pitfalls.  (Alan Childress, Mike Frisch, and I are working on a professional responsibility textbook for Aspen based on the premise that honest lawyers can find themselves in all sorts of trouble even though they aren't hell-bent on lying, cheating, or stealing.)  Persuading oneself that one's client is going to see the light based on the lawyer's moral suasion is one such pitfall.
Posted by Unknown at 7:03 AM 8 comments:

Welcome back from your sabbatical, Joe Nocera!

I've missed you--and I enjoyed your column yesterday (here) immensely!
Posted by Unknown at 6:42 AM No comments:

I've been trying to cancel my Sprint account for a while now.  It's almost impossible, but I think I've done it--at least until I continue to get those darn bills.  Anyone have any clue about how to kill a Sprint account?
Posted by Unknown at 6:22 AM 10 comments:

Please email me at nancy.rapoport@unlv.edu if you'd like a review copy of our Law School Survival Manual.
Posted by Unknown at 6:20 AM No comments:

Over at the Wall Street Journal's Bankruptcy Beat Blog (here).  I couldn't have come up w/that Kinkade one all by myself, but I sure love the sense of humor of that headline writer.
Posted by Unknown at 7:07 PM No comments: