If you're going to send me a $15 gift card to make up for messing up a prior order, perhaps that gift card should actually work on a subsequent order.  Epic (mini)fail.
Posted by Unknown at 10:47 AM 2 comments:

Loved John Kang's post over at The Faculty Lounge (here).  I've been known to yank (invited) pieces from journals when they mess too much with my writing style.  We seem to have been giving law students the notion that only stuffy writing is good writing.  We need to remind them that clear writing is good writing, and that one doesn't have to be overly formal to be a good writer.  My point when I yank an article is that the editors' names aren't going on the author byline, and that I've earned the right to write in my own voice.*

So here's to John Kang's piece!

My take?  As long as boards are composed of people who frequently work with each other and who have more similarities than differences, there's no one there equipped to ask "why are we doing this?"  Without someone asking the questions, there's no reason for boards to change behavior.
Posted by Unknown at 7:03 AM No comments:

See here.
Posted by Unknown at 7:00 AM No comments:

Hat tip to Jackie Benson (who happens to be exceptionally smart, talented, and fun to know) and Above the Law.  You can listen to it here.  Click on Daniel Sokol's blog (here) for the text of the full rap.
Posted by Unknown at 4:48 AM No comments:

Thank you, LexisNexis (and voters)! 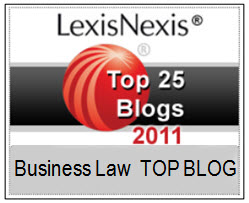 Here's the full announcement and list of honorees.  I love a lot of the blogs on this list (and on the original list), and I'm very grateful to be included.

To vote for the Top Business Law Blog of the Year, click here.  You've got to be registered to vote.  If you haven't previously registered, follow this link to create a new registration or use your sign in credentials from your favorite social media site.   Once you are logged in, you can then VOTE by checking the box next to your favorite Business Law blog then submitting the results. Voting ends on November 5, 2011.

Posted by Unknown at 3:52 PM No comments:

Brian Leiter has it exactly right when it comes to faculty credentials.

See here.
Posted by Unknown at 2:41 PM No comments:

See here.  Stay with it a while.
Posted by Unknown at 5:04 AM No comments:

Yes, sometimes I stay awake worrying about this issue.

Thank you for this once-in-a-lifetime experience (here), Georgia Aquarium!
Posted by Unknown at 6:46 AM No comments:

A don't-miss read over at The Faculty Lounge.

My buddy Bernie Burk's take (here) on the latest job news in yesterday's WSJ (here).  Given that I've just filed a court document bemoaning law firms' decisions to try to bill summer associate time in bankruptcy cases w/o a good explanation, and given that I'm going to talk about fees in bankruptcy this coming Thursday, this topic is near and dear to my heart.
Posted by Unknown at 11:30 AM No comments:

Joe Nocera, Starbucks, Kickstarter, and us.

This morning's New York Times brought another great Joe Nocera column (here).  Starbucks's chairman is trying to develop a microfinance option for Starbucks customers, much like the Kickstarter site does for artists.  It's a great idea.  Count me in.
Posted by Unknown at 7:53 AM No comments:

Great way to start the morning.

Hilarious.
Posted by Unknown at 7:49 AM No comments:

Protests only make sense when they stand for something specific.

The current "occupy" protests remind me a lot of that great line in Network:  "I'm mad as hell, and I'm not going to take this any more!"  But I find myself increasingly frustrated by the tenor of the protests, and not just because some of them have an anti-Semitic tenor.  (Financial protests that blame the Jews?  Shocker.)

But where are the specific solutions in those "occupy" protests?  The great protests of the past involved specifics:  desegregation, an end to discrimination, equal rights.

One of my favorite movies (yep, written by Aaron Sorkin) has this line:  "We've got serious problems, and we need serious people."  Hanging out in a group without having some notion of what action that group wants to take (or whether any of the proposals make sense) isn't a serious solution to a serious problem.  I'm with David Brooks on this one:  oversimplying the problem as 99 vs. 1 gets us nowhere (here).
Posted by Unknown at 5:16 AM 1 comment:

See here.  I couldn't make up behavior like this if I tried.
Posted by Unknown at 4:51 AM No comments:

See? I'm not the only one with a double life.

As if there weren't already a million reasons to read The Faculty Lounge.

Here's another one--Bernie Burk's going to blog there!
Posted by Unknown at 2:22 PM No comments:

Each year, LexisNexis honors a select group of blogs that set the online standard for a given industry. I’ve just been told that this blog is one of the nominated candidates for the Top 25 Business Law Blogs of 2011, featured on the LexisNexis Corporate & Securities Community. (YAY!) If you're comfortable commenting about my blog (and there are TONS of great blogs on the site, so you could comment on a lot of 'em), then please click here.  Thanks!

Posted by Unknown at 6:47 AM No comments:

Congrats to my buddy Jennifer Carr!