So my hubby and I are fine with credit cards monitoring suspicious activity and putting freezes on our accounts when something looks fishy.  That's great customer service.

What isn't great customer service is when a bank freezes transactions that shouldn't be frozen after specific instructions from the customer himself.

Jeff regularly flings himself out of perfectly good airplanes for fun.  He does this once a month, at the same place--and he has done so since Memorial Day Weekend.

Lately, US Bank/REI has decided that, wherever Jeff is, his credit shouldn't come with him--the Heisenberg Uncertainty Principle of Bad Customer Service.  Every month, he tries to charge something at the jump site.  Every month, his account is blocked.  He calls the bank and explains the situation; the bank agrees that the charges shouldn't be blocked; Jeff goes home.  (Of course, when he goes home and tries to pay for parking, the same bank blocks his credit there, too.)

This cycle of folly continues each month:
The cycle of folly has now ended after the bank, yet again, blocked the charges and then explained to Jeff that Jeff must call the bank ahead of time to explain that he is traveling and to ask--basically, with a "pretty, pretty please"--let his charges go through.

No more.  Now Jeff has a card with a different bank.  And we wonder why banks have such a bad rap.
Posted by Unknown at 3:18 PM No comments:

An update for editors everywhere.

From my buddy Kathleen Lyon, some thoughts about editing (here) in response to my frustrated screed (here).
Posted by Unknown at 5:06 AM No comments:

For the shout-out (here).
Posted by Unknown at 6:02 AM No comments:

Tried to order some software.  My tale begins thus:
The best part?  I've figured out what the company means by "we will give you the best service POSSIBLE."

Mixed thoughts about this post on Above the Law.

I do get what Above the Law is saying here, and I also take the point of Anonymous's comment about my screed against bad law review editing, but I've also seen the difficulty that some law students have in transitioning from college to professional school.  There has to be a good way to teach them that the little things matter. And I'm now, after 20+ years on the job, at the point at which I require those who write papers for me to execute this affidavit.

Am I a curmudgeon?  Yep.  Do I think that some clear expectations might help students become more professional?  I sure hope so.

I'm so glad you spoke up against the boycott!
Posted by Unknown at 8:26 AM No comments:

Thanks, Above the Law! 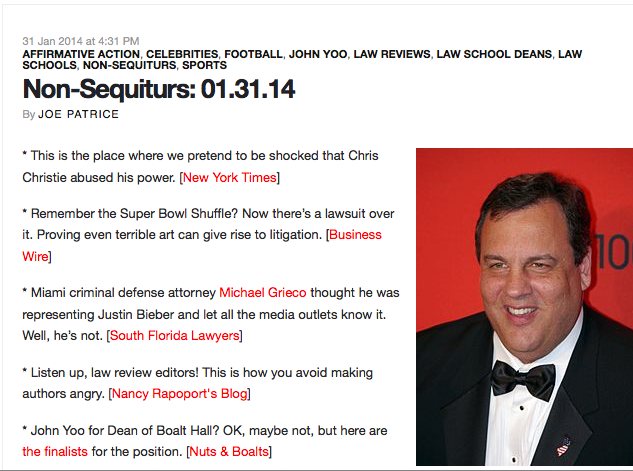 Posted by Unknown at 7:21 AM No comments: